Hunting for the Elusive Herkimer Diamond in Herkimer, NY

Please note: There's a good chance that this post contains affiliate links from which we earn a small commission at no extra cost to you.

Herkimer, New York is a sleepy little town along the Mohawk River, with just under 8,000 residents. It boasts an abundance of natural beauty that has attracted city slickers from Manhattan for years. of course, beauty is pretty easy to come by in upstate New York, but what really put Herkimer, NY on the map was the discovery of hidden gems in the dolostone outcroppings throughout the county.

In the late 18th century, as workmen were busy cutting into the dolostone along the Mohawk Valley, they discovered large amounts of incredibly clear quartz crystals within the rocks. The quartz is double terminated, which means it has two naturally faceted ends, making them much rarer than common quartz.

As the popularity of the gemstone grew, they became known far and wide as Herkimer diamonds, and the town of Herkimer, NY was forever changed.

Today, you can visit several privately run “Herkimer diamond mines” to hunt for your own special gems. Not only is the Herkimer diamond incredibly beautiful, it is also said to have mystical powers, and well, who can resist a bit of geology and magic? Certainly not us!

The Ace of Diamonds: Herkimer Diamond Mine and Campground

Our campsite at Ace of Diamonds

Sound just a little too kitschy to be real? It is — and we loved every minute of our stay at this rural campground and Herkimer diamond mine! We settled into our quiet little campsite just after noon so we could get right to work. We wanted to have plenty of time to hunt for those precious Herkimer diamonds.

When we pulled into the Ace of Diamonds mine, we were greeted by a huge pile of rubble. This is dolostone that has been broken up and moved around with excavators. For $10 ($5 for kids under 7), you can pick around in the rubble in search of Herkimer diamonds, or you can bring your hammers to chisel away at the rock cliffs surrounding the mine. I expected that I would just set up camp and watch the kids hunt for diamonds, but it was totally addictive, and before long I was mining like a true prospector.

You can chisel through the cliff hunting for diamonds

During our visit, we discovered lots of small Herkimer diamonds, but we kept on searching for the elusive big prize (we never found it). Before the Ace of Diamonds closed for the night, we checked out the on-site rock shop and we were totally blown away. It was one of the  most interesting and wonderful souvenir shops we have ever seen. Some examples of their wares: a giant tiger kite hanging from the ceiling with a papier-mache body and about an eight-foot wing span (all handmade), and books ranging from woodsman/woman skills, legends and ghost stories of the valley, encyclopedias on infamous plants and herbs, subjects of divination and lots more. Of course there was a dazzling array of stones and gems, a few from Herkimer, but many from all over the world. We were totally smitten with the place.

You can sort through the rubble looking for Herkimer diamonds

You can rent these hammers at the campground or bring your own.

After dark, when the rock shop and mines are closed, and the owners go home, the campers are basically left to their own devices. We watched a glorious sunset, walked the hills, and hung out with some of the other campers. It’s such a small, mom-and-pop operation, but perfect for families and rock hounds.

Why You Have to Visit Herkimer, NY

I know you’re probably thinking, “why would I want to go to Herkimer?” and the truth is, it’s a small town with one big claim to fame. But people — it’s a day trip from New York City, and most of New England, for that matter. The Mohawk River is lovely for cooling off on a summer day, and you can mine for Herkimer diamonds! I know they’re not real diamonds, but hunting for treasure is so much fun (I think I should have been a pirate!).

If you’re into camping and the outdoors, this is a budget vacation. Camping is just $15 per site — $5 extra if you want electricity. Plus there’s a lot more to this area than you would think. A visit to Herkimer wouldn’t be complete without checking out some of the nearby attractions.

Attractions and Destinations Near Herkimer, NY

The Baseball Hall of Fame, Cooperstown, New York (41 minutes from Herkimer) — If you’re a baseball fan, this is an incredible destination —  an iconic pilgrimage. Check out baseball’s most famous players, as well as some of the most exciting moments in the history of the game.

Howe Caverns, Howe Caves, New York (an hour from Herkimer) — Howe Caverns was discovered in the 1800s, before the Civil War. It’s a popular tourist attraction that takes you more than 156 feet below ground. The cavernous tour takes about 80 minutes, and includes a boat ride on the Lake of Venus.

The Iroquois Indian Museum, Howe Caves, New York (an hour from Herkimer) — After a few hours of caving, head over to the Iroquois Indian Museum. It’s dedicated to celebrating Iroquois culture and diversity, and the grounds include a replica longhouse and an extensive nature park. A huge Iroquois festival is held each Labor Day Weekend, the perfect time for a road trip!

Fort Rickey Discovery Zoo, Rome, New York (30 minutes from Herkimer) — I’m not one to pass up a chance to get up-close-and-personal with critters, and this little zoo is perfect for kids of all ages. Featuring animals from all over the world, kids will especially enjoy the petting zoo, the maternity ward, and the pony rides.

With a plethora of quirky attractions, friendly folk, and beautiful landscapes, Herkimer, NY is an awesome destination for families.  It’s a perfect getaway from the city, and a perfect weekend camping trip. Seriously!

We’ve got lots more stuff about family adventures in New York. Check out these posts:

A Weekend in the Adirondack High Peaks

Here are some more resources for exploring Herkimer, NY and the surrounding countryside (click on the photo for more info): 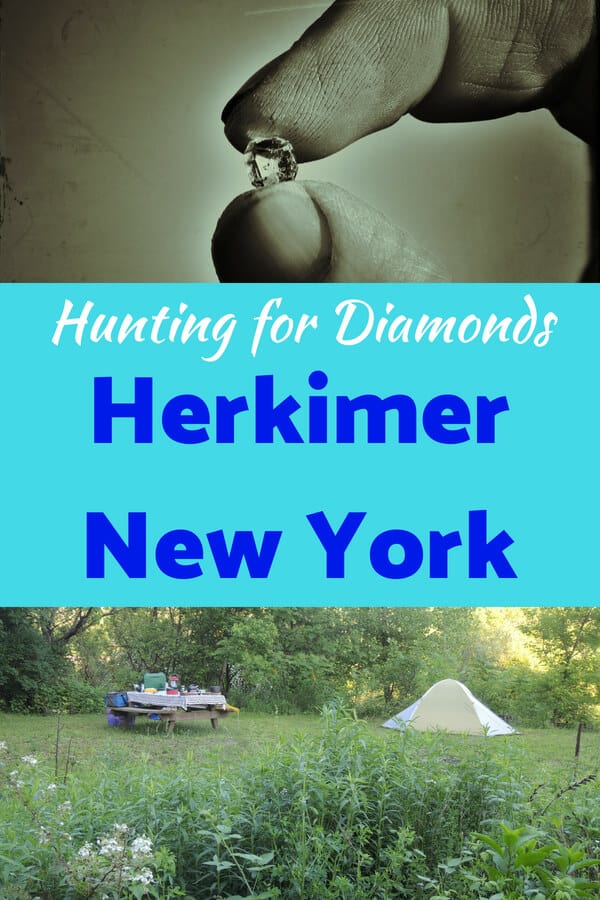 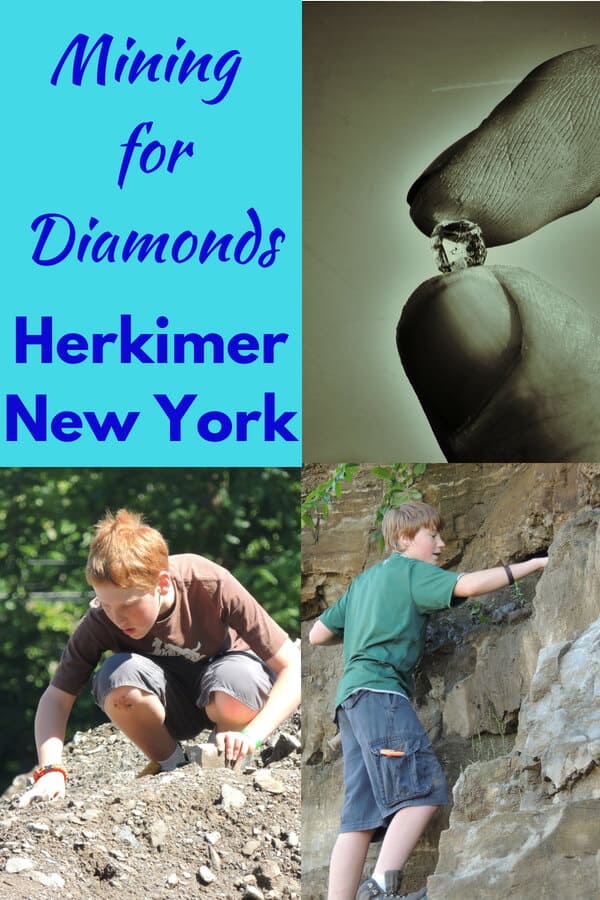 I had NO IDEA you could do that there! We have a place in Arkansas where you can go Diamond hunting and its famous here in the USA, but I have never been there….and its in my own state! HA!

Sounds like you had a great time. I live in NJ and have never been upstate NY. Well, except for a weekend trip right across the stateline, which was beautiful. I am sure that I’d enjoy Herkimer and hunting for diamonds, too.

I will definitely go here. I love a good treasure hunt, love New York state, and just love everything to do with camping. It sounds like fun to me!

What a great outing for you and the kids. Diamonds are definitely an attraction! 🙂

What a cool activity. It sounds much more interesting than panning for gold, because that is much more common. I didn’t know this existed.

I’ve been to cooperstown a few times, but i’m not familiar with Herkimer at all. It looks like something kids would love! have to try it.

Thanks for visiting, Tanja! I love #Photofriday! I’m popping over to your site right now.

Wow! Sounds like a fun adventure. Wouldn’t it just be over-the-top fun to find that elusive diamond!

That’s what we were hoping for, Patricia. Luckily we don’t live too far away. We’re going to try again this summer!

This looks like SO MUCH FUN!!! My kids would love to go digging for diamonds. We are planning a trip to DC and NY over spring break. I bookedmarked this page so I can come back to it in case we have time for a detour. Love little finds like that one. I would never have known about it without reading it here- thanks!

It might be far for a DC vacation, but it’s not too far from NYC. Spring is really pretty in upstate New York.

Wow what a cool activity!

This is a great family activity! We recently went digging for sand roses and the kids had an awesome time. There is something soothing about digging in dirt!

I have panned for gold, would love to hunt for diamonds.

Fall in Love with Utah: A Journey on Scenic Byway 12 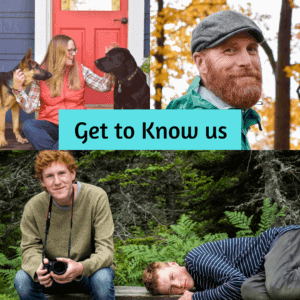